You never know what a letter can do

by diane_w
Comments are off 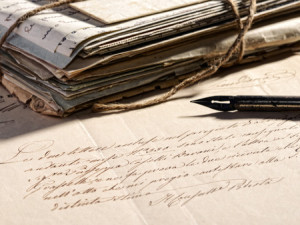 Letters used to be the main form of communication. Instead of sending a text message or an email or calling, you wrote a letter to express how you were feeling or to share important news. It took time and effort. The resulting reply took time to come back to you, if you got a reply at all. A letter had great power and meaning when you did receive it because it meant someone had put care and thought into composing and sending it.

There have been many letters throughout history that have changed lives and circumstances. Famous letters are being discovered all the time, which give us insight into the thoughts and minds of some of the greatest people in history. Some of these discoveries are even a little surprising, such as the discovery that 10 year old Fidel Castro tried to send a letter to President Franklin D. Roosevelt asking for a ten dollar bill or that Queen Elizabeth personally sent her scone recipe to President Eisenhower after he enjoyed them during a visit.

When you send a letter or card to a friend or loved one, it might not make history books. But it can make a lasting impact on the person you send it to and become a part of the history of your relationship.

So even though it may be simpler to send a text message or an email, think about sending a letter or a card. This written correspondence can become a part of history, a keepsake, a memento to be saved and treasured. It means just a little bit more when you know someone put in the time and effort to write their thoughts on paper.

Think about it; the effect that a simple letter or card has can be greater than you know!

Finding a work/life balance requires a little self-care
No Responses.

Spread some 'feel good'!
No Responses.

Some special attention for the new mom
No Responses.

Let your positive attitude lead the way
No Responses.

Friendship: What matters most
No Responses.